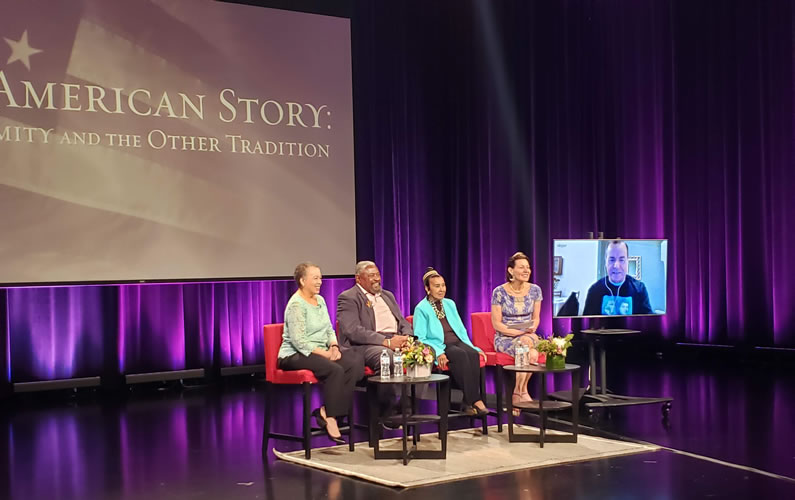 The program was streamed live from Georgia Public Broadcasting’s studio with Don Mullan skyped in on the big monitor.

Georgia Public Broadcasting’s Live Panel and Streaming of the documentary An American Story: Race Amity and The Other Tradition attracted a large audience that heard remarks and discussion of the power of race amity by Civil Rights leader and television pioneer Xernona Clayton along with groundbreaking educator/author Beverly Daniel Tatum, international activist social and author Don Mullan, and NCRA founding executive director, William H. “Smitty” Smith who is co-executive producer and senior writer for the documentary. Don Mullan was skyped in from Burkina Faso where he was meeting on the Green Wall of Africa Project.

The Thursday evening program served as a lead in activity to Atlanta’s Race Amity Day observation on Sunday, June 9. It was organized by Georgia Public Broadcasting (GPB) with assistance from the Spiritual Assembly of Baha’is of Atlanta. The evening included the documentary screening followed by a panel discussion moderated by Virginia Prescott who is host of GPB daily radio program “On Second Thought.” Ms. Clayton, who was fondly and jokingly referred to as B-O (Before Oprah), was the first black woman in the South to host a daily television program. As a Civil Rights activist and confidant of Martin Luther King and frequently traveling companion to Coretta Scott King, she gained national attention when Calvin Craig, the Grand Dragon of the Ku Klux Klan in Georgia, appeared on her program, which led to a dialogue with him that influenced him to resign from the Klan and renounce the organization. Beverly Daniel Tatum, PhD, who was one of the panelists, is the nationally known author of one of the seminal books in understanding race relations in America, Why Are All The Black Kids Sitting Together In The Cafeteria. Dr. Tatum, a psychologist, also served as the president of the renowned Spelman College in Atlanta.

A packed audience gave an enthusiastic reception to the panelists and a thunderous round of applause at the program’s conclusion.